skip to main | skip to sidebar

Kundalini is the energy that creates and maintains the physical body and consciousness while in manifestation. Through which the body and consciousness will progressively raise in vibration and expand as physical growth and soul essence integration continues over time. In most contemporary human, only a small portion of the Kundalini , life-force is used, and the Central Column is not the fully expanded Pillar of Light. Kundalini is usally seen in the color red and rises from the tail bone upward through the central column,the haraline.

Golden Kundalini Awakening. I witness three spirals on top of the head, which represent the Trinity Aspects of the Soul Self , Spirit Self and Human Self. A clearing and alignment is facilitated by spinning the spirals. Then the spirals expand and appear as a hooded cobra. This energy connects to the Galactic Center, braids and ascends down the Central Column through the transpersonal charka to the root chakra. The energy is golden, not red. This is the alignment and awakening of the transition into the dimensional Tree of Life Grid.
Crown chakra is located at the top of the head at the crown. The Soul braids into the physical body through the Crown Chakra. This Chakra if open and clear connects to the Gateway or Ascension Chakras: the Golden Crown, the Causal Chakra, the Soul Star Chakra, and also the Stellar Gateway, a vortexing tunnel which transmits energy and information from Cosmic Intelligences and the Divine Source. The Crown Chakra is the seat of enlightenment and vibrates to the Coherent Light color rays of violet, gold, or pure white. It is ruled by the element of Pure Spirit. The Old Age Archetype of this Chakra depicted it as closed to most of humanity. Only those few, the Great Teachers, the Messiah, or the Buddha were capable of Enlightenment. The New Light and New Time Archetype of this Chakra represents the energy of initiation, which is available to all who choose to respond to the vibration of the New Light and the frequency of the New Time. No longer an exclusive Gateway, the Crown Chakra transmits energy of enlightenment throughout the Collective Consciousness. Thus enlightenment is the culmination of a process of initiation that may be completed by only a few, but will be available to all. The fields of influence that are assisting in the transmutation of the Crown Chakra for Earth and all of Her Life forms are the Planetary Portals.

Back to main Site 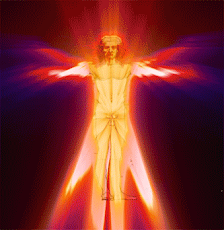